I've spent a little time improving the Pure Data MIDI Step Sequencer patch that was originally posted here. This new version adds selectable step divisions, and a fairly decent swing algorithm. The code has been tidied up somewhat too; in many places, lists provide a much more cohesive data structure than the separate pitch and velocity streams that the first version used. 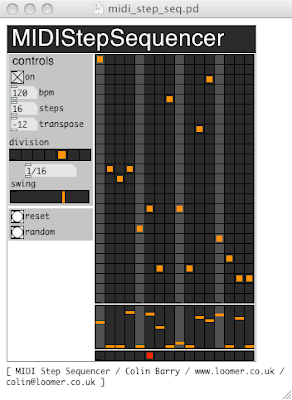 Download the updated patch here.
Posted by Loomer at 23:47 No comments:

We are pleased to announce the release of String 1.1 - download the updated version here.

String 1.1, a free update for registered users, contains the following fixes and features:
The effects only version, "StringFX",  is a separate plugin which can be used to process any external instruments with String's effects section:

And as a bonus, KVR's HunterKiller has kindly provided over 150 fantastic new presets for registered users of String - download them here. Many thanks to HunterKiller for the hard work he put into these awesome sounds.
Posted by Loomer at 10:29 No comments: