What is Modulation?
Aspect's flexible patching and modulation system can be a source of confusion to users more used to synthesizers with a fixed architecture. In synthesis, to modulate a parameter means to change the parameter's value whilst the sound is playing. This adds interest to what would otherwise be dull, static sounds. Most synth users are familiar with the basic modulation sources - envelopes and LFOs (low frequency oscillators). One common arrangement is the modulation of an oscillator's pitch by an LFO, producing vibrato. Another is the modulation of a filter's cutoff frequency by an envelope, resulting in a sound that has varying degrees of brightness as the higher frequencies are dynamically removed.

The Aspect Semi-Modular Synthesizer
Aspect is a synthesizer in the tradition of semi-modular synthesizers like the Korg MS-10 and Korg MS-20. The appeal of these instruments is not only in their fantastic analogue sound, but in their versatility. Re-routing means that any nearly any component can be used as a modulation source. The Patch panel expands this concept by allowing modulation sources to be combined and transformed in various ways. Download Aspect for Windows, Mac OS X, and Linux, in Audio Unit, VST, and RTAS Plugin formats.

The basic steps for routing Modulation Sources in Aspect are as follows:

Here is another example of an inverted Modulation Source. This tutorial on sequencing with a modular synthesizer uses an inverted Sawtooth LFO routed to the Output Amplifier to produce a quick Attack and slow Decay repeating envelope shape.

Because all signals within Aspect can be used for Modulation purposes, even MIDI control data such as Note Pitch and Velocity can be inverted. The following Program illustrates this:
The Oscillator is now controlled by the inverted Note Pitch. As you move up the keyboard, the pitch of the oscillator decreases! 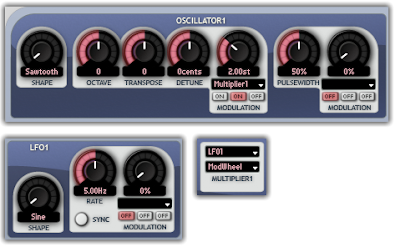 LFOs that gradually fade up to their maximum Depth is another often used synthesis technique. Multiplying an LFO by an Envelope will accomplish this. In this case, the Envelope shape should have maximum Sustain. The Envelope's Attack parameter will govern how long it takes to fade in: 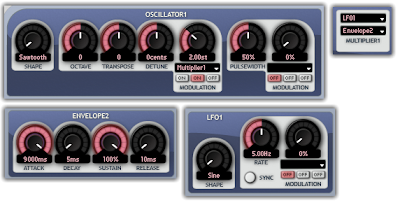 Part 2 of this tutorial will cover the remaining Patch Components, which are the Lag Generator, the Sample & Hold unit, and the Adders.
Posted by Loomer at 16:07